The Battle of the Blackberries

There was a man in Thessaly,
And he was wondrous wise,
He jumped into a thorn bush,
And scratched out both his eyes
And when he saw his eyes were out,
He danced with might and main,
Then jumped into another bush
And scratched them in again.

“Ouch!” I gasped.
I ripped off my gardening glove. A red thorn had pierced the leather, and a sizable sliver was firmly embedded in my right thumb. I sighed and winced as I slowly pulled it out: the prick was just one of many wounds I had suffered thus far in the yard. Sucking my bleeding thumb, I gazed at the hideous brambles around me. They covered two corners of the yard, making up about one-fourth of the lot or roughly the square footage of our master bedroom. The canes in the southeast corner sprawled in all directions, and some had even climbed a decorative plum tree. There was no way I could handle that area while my husband was at work. Instead, I was tackling the northeast corner, where the thorny plants were not so well established. In that corner, the brambles were growing out of a neglected pile of dirt that was jammed between the wooden fence and a tall shade tree.
Later a neighbor informed me that previous renters had dug up the entire lawn and started a marijuana farm. By the time the police came to investigate the place—this was back in the good old days when pot was illegal in British Columbia—the couple had already fled. The officers dug up the crops and left the yard scarred with odd holes, and since the landlord lives in a faraway land called Magrath, he didn’t know any of this until he stopped receiving the rent money. Shortly afterward, my brother-in-law and his wife rented the place and began restoring the lawn, leaving a large plot for a garden of very legal, nonaddictive veggies. But still, there were the thorny brambles, which I suspect came about—or were at least aggravated—by the potheads’ plowing.
Even though we had moved into this infamous home only a couple of weeks prior to my gardening attempts, it was already mid-May, and my green-thumbed husband was very eager to improve the yard. He had planted peas (which were a great success) and potatoes (which were more work than they were worth, considering the price of potatoes at the local grocery store). But, as I mentioned, my husband is gifted with gardening skills, not I. Although I performed yard work every Saturday of my childhood, I have a black thumb. For some reason I can never get what I want to grow where I want it, no matter how much reading and thought and muscle I dedicate to the task. Take, for instance, the flower garden along the walkway to our front door. For two years I planted, weeded, and fertilized, but all flowers and ferns withered and died prematurely despite my efforts. This year I smothered the patch in mulch and wood chips.
Needless to say, killing is my specialty, and that was exactly what I aimed to do that May. I cut the next stalk at the base of the plant and used my rusty pruning shears to toss the cane onto a tarp. Sweat dripped down my forehead as I continued stabbing through the patch. It was a warm spring, but I had learned from my first attempt to wear an old sweatshirt as a shield against the vengeful thorns.
These noxious brambles were Himalayan blackberries, a particularly aggressive invasive plant that spans across much of North America’s Pacific coast. It was my first time encountering them—or at least my first realization that I was encountering them—and since then, the Himalayan blackberry has starred in my most horrifying nightmares. Five prickly serrated leaves topped each mature cane that found its way atop the dried, dead sticks of their ancestors, as well as above some litter and old chew toys. Since it was still early in the season, the fruit was just beginning to grow; and during my battle against the brambles, the hard, green berries seemed more like the tail of a dreaded rattlesnake. 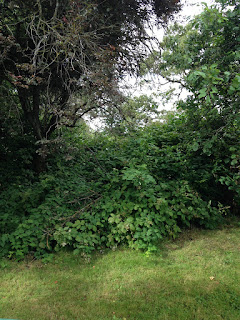 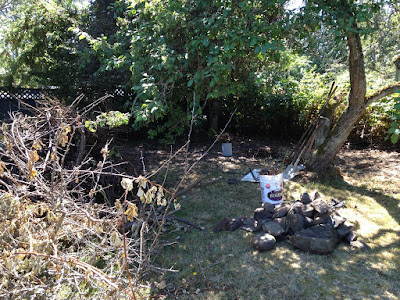 Once I had a sizable patch clipped, I grabbed the shovel. The ground was dry and hard, but because it was raised, I carefully stepped up and slammed the shovel into the side of the mound. The chalky dirt crumbled downward, revealing the roots. I had done my research: the “crown,” or knot just below the stalks, must be removed in order for the plant to truly perish. After yanking out four or five crowns, I simply couldn’t breathe in that heavy sweatshirt. I dumped the roots into a large white bucket that served as a mass grave for my vanquished foes. Then I muttered to the devil to prepare a place in hell for the jerk who brought Himalayan blackberries to the New World.
As it turns out, the Himalayan blackberry hopped the Pacific Ocean back in the late nineteenth century when an American exchanged his seeds for some from India, hence the name Himalayan blackberry. Technically the plant is not truly Indian; nowadays botanists would be more likely to label it as the Armenian blackberry. The plant spans westward across Europe, which explains why we came across it when my husband and I visited some old palace gardens on our trip to Portugal during Holy Week of 2019. My husband saw it first, and we both stared in disbelief: a blackberry cane grew among the well-groomed bushes and flowers. The idea of intentionally planting weeds made my tummy churn (although, I was pregnant at the time, so who knows if it was actually morning sickness). But then I realized that the cane did not seem to be harming the surrounding plants, and, what was even more fascinating, it was lonely—no sprawling comrades were visible. I supposed, then, that if this was how the blackberry grew in its own territory, perhaps it wasn’t such a crazy idea for that jerk to buy some seeds.
As for the jerk, his name was Luther Burbank—the Luther Burbank of Santa Rosa, California, where they celebrate a parade and Arbor Day in his honor. Back in his day, he was a very successful horticulturist, which means he spent most of his days selecting and crossing different plants for favorable outcomes. For instance, he cultivated cacti until they were spineless, and he cross-bred poppies until they were blue. Of course, those were more fun-and-games creations compared to his work on fruits and vegetables, through which he intended to reduce world hunger. (When I learned that, I kindly asked the devil to ignore my previous request.) One notable contribution was his Burbank potato, which was around three times larger than its predecessor and which was the grandfather of the gigantic Russet potato I prefer to buy from the local grocer. Another success was his plum, or plums, rather; by the end of his career, he had created over one hundred new varieties.
And then there was his blackberry. In the 1880s, Burbank sought to create a thornless blackberry in hopes to develop an easier commercial crop than the natural varieties. He crossed dewberries with blackberries, and—voila!—a thornless plant came into being. However, thornlessness came at a price. As Burbank put it, “Such items as increased size of fruit, good flavor, firm flesh, and time of ripening . . . were defective.” But soon came his breakthrough: the Himalayan blackberry seeds from India. The flavor, size, and quantity returned, along with the thorns, until Burbank concocted the perfect hybrid. Then he boldly stated, “The nursery rhyme about the wise man and the bramble-bush will probably have little meaning for our grandchildren. For the brambles of their day will have no thorns with which to scratch out eyes—let alone scratch them in again.” Oh, if only! His perfected variety obediently remained at the farm, while the Himalayan, with the help of birds and rodents, slithered away and rapidly invaded North America. Now, about one-hundred and forty years later, Himalayan blackberries stalk forests, parks, yards, and even highway divides, a sight that remains wicked for eleven months of the year.
But during one preciously short month, the tips of the brambles cease to resemble rattlesnakes. And it is for this reason that my husband and I never fully eradicated them from the yard. These days, a few years after we moved in, the ground in the yard is mostly level, and mowable weeds—the grass is yet to come—have grown in the two patches of land that we cleared. However, there is still a row of blackberries lining the fence on the south side. My stomach churns nervously whenever I see it, that is, until sweet August, when instead my stomach churns hungrily at the sight of the plump, dark purple berries. Himalayan blackberries bear tons of fruit; that one row provides about twenty cups, which I happily cook into as many sweet dishes as possible, from ice cream to salad dressing, or freeze for later in the year. 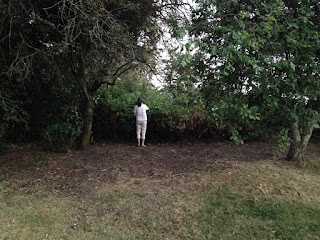 And then in April 2020, we experienced the early days of isolation spurred by COVID-19. Because I was not certain I could find good produce on my next grocery run, I decided to finish last year’s harvest by baking a cobbler. (I was already exhausted from board games, and one needs something delicious to eat during a globalized house arrest.) The recipe was remarkably simple: butter, sugar, flour, and milk mixed together with two cups of blackberries and baked for an hour. After the pan cooled, I dished up two slices onto flowered plates and plopped a large dollop of whipped cream on each. My husband and I ate as we watched our church leaders speak on TV for Palm Sunday. As the tart berries, cake, and foamy cream blended in my mouth, I thought back on the excruciating work we accomplished two summers prior. The yard had changed a lot since then. My job that upcoming summer was to attack the caterpillars in the apple tree: it had yet to grow anything edible. As my mind wandered to the topic of pesticides and repellents, which are sometimes controversial topics in British Columbia, I was reminded of the consequences of Luther Burbank’s efforts to perfect blackberries. I wondered, in all my efforts to improve our little plot of rented land, have I accidentally harmed it with good intentions?
I took another refreshing bite of the glazy cobbler. That kind of question is best answered with an old adage: only time will tell. That spring afternoon, as I sat comfortably on my living room couch, I thanked Luther Burbank for bringing me some Himalayan blackberries.