“She should have died, hereafter...” Erinne heard the words of a soliloquy she memorised in grade nine trill through her head in her own voice. Her young and careless voice. Before she had a daughter and a double chin and a dead best friend.

There was too much pink in the sky for the anniversary of a death. At least there were clouds, and at least there was fog. And it had started to snow. 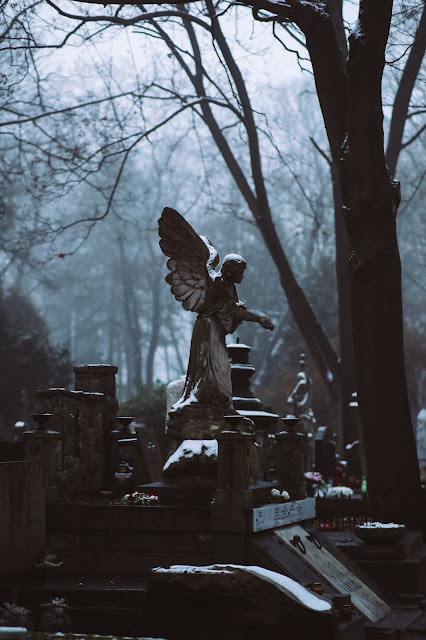 Meghan was sleeping upstairs. Hopefully. Probably. Not. Who knew? The two drunk, drugged adults in the house didn’t. Out of sight, almost out of mind.

“Six, nearly seven,” Erinne responded in half-intoxicated laughter, giving a playful push to her older sister. “You’re a good auntie, but you forget birthdays and stuff,” she slurred. They both laughed.

Their husbands had both left them around the same time the year before, and they moved in together and reverted. High school all over, except one of them had a daughter, and they both had money and real things to actually complain about. Real feelings to actually repress. Pity party. Emphasis on the party. It was pitiful, Erinne remembered in painful, nostalgic disgust. She bent over and brushed off the fluffy, wet snow that had collected on the top of the tombstone in the 10 minutes or so she’d been standing at her sister’s grave. The pink was gone from the sky now. The sun was going twilight behind the tall dark trees that always surround a cemetery.

“No! Sleep! Till Brooklyn!” As piercing and annoying as the Beastie Boys themselves, the two party animals shout-sang. Evenings with a sleeping child, after a long day of feeling sorry for themselves, frequently turned their living room into a cheap karaoke bar of their very own.

Into the night, and sometimes the rising sun, that apartment was a place where the forgotten of the earth could come in and forget their own woes. Like the racoons Meghan and Agatha left dog food out for, men and women looking for more, but wanting the handout, came in for a drink or a smoke, or a kick.

Marijuana didn’t really count as a drug problem. Seriously, it was practically a spiritual incense they burned through while huddled around Nirvana, playing out the boom box. But with those kicks—powderkeg candy for the adventurous adult—they knew they were crossing some sort of line. The deep river, the neighbor’s backyard, acting class and asking out guys. For better or for worse, sisters had always pushed each other past limits; it was like part of their job.

Erinne reached into her coat pocket and pulled out a tiny pink paper crane, placed it on the grave, and rested her hand beside it. As she stood up a tear dropped and disappeared into the snow, now piling up around her feet.

“So I was reading—” She remembered her sister say one night, she’ll never forget.

“Wait, what? You? Reading?” Erinne teased.

“Shhh. Stop!” She clumsily pressed a finger to Erinne’s disbelieving lips. “Hey, I read! So, I was reading that origami book that Meg brought home from school.” Her eyes widened and glistened with that contagious enthusiasm she would get while onstage, as a teenager. “It says the paper cranes are a symbol of hope in Japan or something like that.”

“Yes, I’ve heard that. I thought it was a thousand or something.”

“No, if you make a thousand, you get a miracle. But they are all good luck. I mean, hope.” Agatha stretched her arm across her sister’s lap to the small bookshelf that sat beside the couch. She picked up the large book and shook it, as she pulled it toward herself. It made that flapping sound that soft-cover books make when you shake them. She held it up in the air, breathing in and beaming a hopeful grin, and then she smacked it down on the glass coffee table in front of the couch.

“We’re gonna figure out... how to make these, tonight!” And she grabbed the little pink paper wrapping from their party favor drugs.

It became their new tradition. Their special treat. They would drug as usual, but then, they would fold, and they would hope. With each careful crease, each wing and head and tail they formed from those wretched wrappers, they had a little bit more hope.

Erinne stared down at the tiny paper bird on the stone, till she could see nothing but white.

ckk said…
The time transitions in this story are really well done. The actions at the grave and the actions of the past are coherently and skillfully woven together. Wished I could write this smoothly.
October 24, 2021 at 12:55 PM