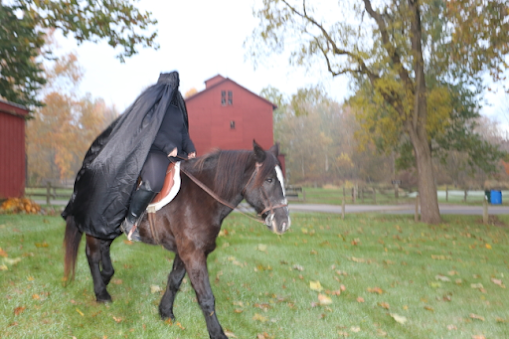 I’m waiting for Heather, my running partner and a daughter-in-law, to arrive. Most of the congregating 975 runners are in costume, mine a rendition of Jack Skellington, this year’s creative work of Beverly, my wife and costume designer. A man on a dark horse, his head hidden beneath an oversized coat, weaves in and out of the congregating crowd. Heather finally arrives in her Wonder Woman outfit, and we find a spot among the burgeoning crowd, ready for the race to begin. There’s a countdown, and the runners are off. Those at the beginning of the crowd will finish the 3.1 mile course in only 15 minutes.

It’s known as the 2022 Provo Haunted Half, though Heather and I are running the 5K option, which we have done every Halloween since 2016. Last year’s Halloween 5K felt like it would be my last race. I’ve been slowing down, not running so much, skipping the regular races because of the pandemic or a particular ache that might get in the way of doing my best. But as I celebrated my 70th birthday, just before this year’s Halloween run, I decided that taking part in one last competitive race, as a septuagenarian, would be a nice segue into a more relaxed retirement regimen of exercise I had recently been considering, simply walking a few miles each morning.

Yes, this year will be my last race. It’s also the first year we are running without some of Heather’s boys, my grandsons. They’re off on a mission, and college, and other endeavors. Heather’s a serious athlete. She participates in many marathons, Ironman triathlons, and other strenuous physical events. She admitted early in our racing partnership that her interest in running a 5K with me was to encourage her sons to run. I mentally told myself from that disclosure: What child would want to compete against an Olympic-class mother? Better to pit them against their grandfather, whom they would have an excellent chance of beating in a 5K race.

When Heather heard about my final-race announcement, she immediately volunteered to accompany me on this last transitional sally. ‘Accompany’ has been a relative description when it comes to Heather’s and her sons’ traditional running style with me. It usually meant seeing them leave me at the starting line, then welcoming me to the finish line, some twenty minutes after they arrived there.

Heather and I begin our run down the Orem City street.

“Heather, it's fine with me if you run ahead.” I offer.

“No, we’ll finish this race together.” She responds.

I counter, “Now that we’re running, I probably won’t talk much.”

“That’s OK. I’ll do the talking, and you just keep running.”

I smile at such an unselfish gesture from a fierce competitor whom I know is wincing inside every time a runner passes us by.

We run past the houses in the neighborhood towards Provo Canyon until we come to the Murdock Canal Trail, winding through the Orem City Cemetery, such a fitting path for a Halloween race. The one-mile banner looms up ahead, and Heather retrieves her phone to film some race-footage to share with her family.

Now that I’ve run the first mile of the race, I’m already winded, my legs aching, my breath ragged, my body begging my mind to stop this madness. But, miraculously, at about mile one, my breathing becomes easier, thoughts of actually finishing the race begin to return, and the mixture of newly released endorphins carries me forward towards mile two. The “runner’s high” is a relative term. Though some of my running friends swear by its reality, for me it has been more of a reprieve from exhaustion early in the race, a chance to grasp what some might call my second wind.

Heather’s phone rings. Her daughters have FaceTimed her to see how the race is going. She turns her camera toward me, and the girls, ages 8 and 10, cheer me on to the two-mile marker, as we exit the cemetery. Although I’m getting exhausted, slowing down, aching to stop, what grandpa would quit running when his granddaughters are cheering on his every step?

The last mile, turning south, is all downhill. My runner’s high, whether real or perceived, has long since evaporated. Now, it's just hard work putting one foot before the other, then traversing inside a darkened tunnel enclosure for another Halloween effect, finally jogging through an oversized jack-o'-lantern's gaping mouth, and the race is over. The announcer, introducing the race finishers to the onlookers, comments on my recent 70th birthday, as if apologizing to the crowd for my slow run.

After taking photos, we retrieve our results page from the timing trailer, and I see that I have finished third in my new age group of 70-99. But the next line on the sheet brings me back to the reality of the race. I finished third place in a field of three runners. I could have walked the race and still arrived in the same place. However, Heather’s running encouragement helped me to trim three to four minutes off of my regular 5K completion time, a little reward for my personal competition with myself, along with the third-place medal which Beverly hung on the last remaining hook for my racing trophies, on the wall of my home writing retreat.

I'm starting to imagine the attraction of running a race in my 80th year, as an octogenarian. Maybe I can convince the race administrators in that distant time to open up a new age group, ‘80 and older’, and I might actually win first place, but only if I can make it the entire distance. My youngest group of grandchildren will be teenagers then, eager to beat their grandpa in their own Halloween 5K. Heather’s daughters will heartily pass me by as they scamper to the finish line in that race of the future. They know their grandpa will eventually arrive and congratulate them on their win, if they’re willing to wait the hour or more for me to finally reach the end of the course.

Maybe, at eighty, I will run my last race. 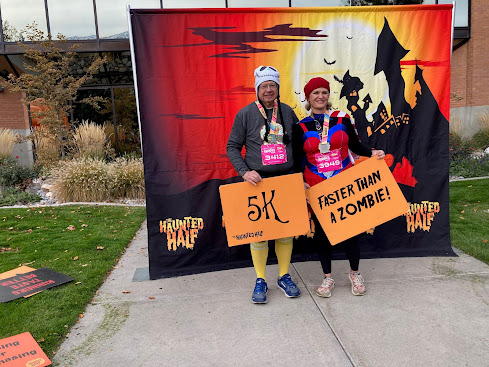 andy8mcdonalds said…
Sorry I couldn’t be there for this last race. I have a feeling though you probably have at least one more in you that I’ll be able to run with as well.
December 7, 2022 at 10:11 PM

Steve said…
Your writing about life a few years ahead of mine teaches me about facing the next steps in life with grace and purpose.
December 8, 2022 at 4:28 AM

Patrick Madden said…
Nice essaying, nice running. It's gratifying to read this and know that you're still writing. Thank you for sharing, Kelly.
December 10, 2022 at 12:38 PM

Linda said…
A fun post that should be motivating (since I'm just a month behind your septigenerian status), but I don't feel a bit motivated . . . or even guilty! I do, however, enjoy 5Ks via a clever post. Gracias!