She was not much to look at, this Post on Highway 2.

Some even said she ruined the view.

But she stood her ground firm, holding up power lines

to keep them all out of the tinder-dry pines.

Her job was important, as any can see—

to cities and towns, to families and shops:

and power heating and cooling fans

It was a team effort with miles of posts

running power to where it was needed the most.

And one day a Bluebird flew up from the trees,

to see you out here in my part of the skies.”

To which Bluebird replied, “You're right—I am blue.

If a cat ate your brother then you would be too.”

Is there anything I can do for you?”

The Post asked so sweetly and standing so tall.

“Feel free to ask for anything at all.”

is to come sit on your wire for a little rest.”

So the bird floated down, light as a bubble,

to rest on the wire, and he was really no trouble.

That is how it all began,

Because once poor Bluebird stopped to rest,

many others came and did their best

To console their fellow's sorrowing soul

all supported by this wooden pole.

A Robin brought him up some seeds

but she herself also had needs

Because her nest was recently raided.

Her eggs would need to be incubated,

But she had been flying all around;

no safe nesting spot could be found.

Of space on which to build her nest.

Not much to look at, but surely best

high and quite far off the ground.

And once quick Sparrow saw the crowd

of mourning birds he chirped aloud,

“Is this a party that I see?

Why has no one invited me?”

The others assured him he was wrong,

then told what was really going on.

Giving a spot for Robin's nest

And comfort for poor Bluebird too.

This compliment was touching true.

Even despite white plopping poo

but Sparrow had some troubling words.

I'm sure Bluebird could use some cheer—

The thought was kind, and the Pole

was too slow to object. How could she say no?

The lines were growing more difficult to hold,

but to stop the birds would seem so cold

Because poor Bluebird did perk up a bit, 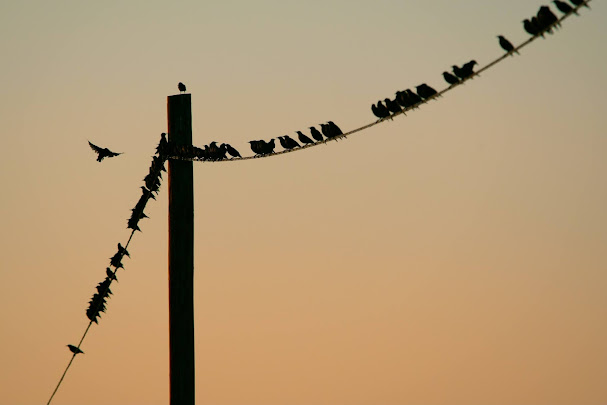 Then more birds came, quite entranced

by Sparrow's showy hop and dance.

They sat all along the power lines,

which began to sink towards the pines.

Chirps and twitters filled the air

past all the birds on the wire shelf.

She tried to shout, “Stop! This is too much for me!”

But no one heard her anxious plea.

but birds kept coming to see the show.

silently, while chirping 'round

Birds hopped and pooped and pecked and pranced,

Then suddenly they scattered, flying round—

shocked by a quake and cracking sound.

Down below the Pole was hit

by a speeding car that in a fit

Of panic had veered right off the street,

causing all the birds to lift their feet.

The sun was sinking, it barely shone

And who would help? On whom could she rest?

Her strength was now put to the test.

She had to stand and hold the wire.

If it dropped it just might start a fire

And then all around her would go up in smoke.

She had to stand firm! She could not choke.

Splinters sticking out of her side

and the stress of cracked wood deep inside

She weighed her options, the precious few.

Along came Sparrow, thinking now all was fine,

but the Post said, “don't you dare set a foot on that line!”

So she snapped and threatened each bird that came near,

not out of malice—but out of fear.

She felt so very frail, she swayed and stirred.

She could not hold weight now. Not even a bird.

Down below a driver whipped out his phone

To call for help. That's what she needed to do—

call for help. But the question was, who?

The trees were too short. Not the birds, not the car.

She was sure to contort, all else was too far.

Then out peeked the first little twinkling star.

That small little light filled her with fright.

Would she have to stand hurt like this all through the night?

She called out, “Help me! Oh somebody please!”

The words seemed to scatter on the breath of the breeze.

She called out again, as loud as she could

and the echoes rang out through the mountainous woods.

The car shifted a little, and the poor Post shook.

She was sure to fall now and could scarcely look.

Many had leaned on her over the years,

but now she had no one. Her heart was in tears.

She felt a great pain and heard a creak from below.

Her strength would soon fail her and down she would go.

Then the electrical line trembled and shook.

The Post held her breath and then took a look.

From both directions the line was pulled.

It was pulled so taut that it could hold

a Post. Yes her! The line held her upright.

Someone had heard her call out that night.

had gently leaned out in the brimming starlight.

“Thank you!” she cried to her sisters far out,

and she heard “you're welcome!” in a very faint shout.

And so she held on, her hope now renewed,

until the next morning when she was patched up and glued.

So the wires stayed high, the power still flowed.

The Post still stood up at the side of the road.

To find the friends who helped her that dark scary night

To not feel alone, to feel cared for and seen.

Though the distance is great, the Posts still convene

Together in heart, tied by the burden they share,

Offering each other support, love, and care—

And sometimes even a place for the birds of the air.