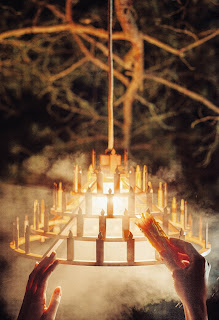 Editor's note: This is a public-domain posting to match the theme of the season.

Mrs. Olcott called her boys, and bade them go to the pine woods and get the finest, handsomest young hemlock tree that they could find.

"Get one that is straight and tall, with well-boughed branches on it, and put it where you can draw it under the wood-shed after dark," she added.

The boys went to Pine Hill, and there they picked out the finest young tree on all the hill, and said, "We will take this one." So, with their hatchets they hewed it down and brought it safely home the next night when all was dark. And when Roger was quietly sleeping in the adjoining room, they dragged the tree into the kitchen. It was too tall, so they took it out again and cut it off two or three feet at the base. Then they propped it up, and the curtains being down over the windows, and blankets being fastened over the curtains to prevent any one looking in, and the door being doubly barred to prevent any one coming in, they all went to bed.

Very early the next morning, while the stars shone on the snow-covered hills—the same stars that shone sixteen hundred years before on the hills when Christ was born in Bethlehem—the little Puritan mother in New England arose very softly. She went out and lit the kitchen fire anew from the ash-covered embers. She fastened upon the twigs of the tree the gifts she had bought in Boston for her boys and girl. Then she took as many as twenty pieces of candle and fixed them upon the branches. After that she softly called Rupert, Robert and Lucy, and told them to get up and come into the kitchen.

Hurrying back, she began, with a bit of a burning stick, to light the candles. Just as the last one was set aflame, in trooped the three children.

Before they had time to say a word, they were silenced by their mother's warning.

"I wish to fetch Roger in and wake him up before it," she said. "Keep still until I come back!"

The little lad, fast asleep, was lifted in a blanket and gently carried by his mother into the beautiful presence.

"See! Roger, my boy, see!" she said, arousing him. "It is Christmas morning now! In England they only have Christmas-boughs, but here in New England we have a whole Christmas-tree."

"O mother!" he cried. "O Lucy! Is it really, really true, and no dream at all? Yes, I see! I see! O mother, it is so beautiful! Were all the trees on all the hills lighted up that way when Christ was born? And, mother," he added, clapping his little hands with joy at the thought, "why, yes, the stars did sing when Christ was born! They must be glad, then, and keep Christmas, too, in heaven. I know they must, and there will be good times there."

"Yes," said his mother; "there will be good times there, Roger."

"Then," said the boy, "I sha'n't mind going, now that I've seen the Christmas-bough. I—What is that, mother?"

What was it that they heard? The little Olcott home had never before seemed to tremble so. There were taps at the window, there were knocks at the door—and it was as yet scarcely the break of day! There were voices also, shouting something to somebody.

"Shall I put out the candles, mother?" whispered Robert.

"What will they do to us for having the tree? I wish we hadn't it," regretted Rupert; while Lucy clung to her mother's gown and shrieked with all her strength, "It's Indians!"

Pale and white and still, ready to meet her fate, stood Mrs. Olcott, until, out of the knocking and the tapping at her door, her heart caught a sound. It was a voice calling, "Rachel! Rachel! Rachel!"

"Unbar the door!" she cried back to her boys; "it's your father calling!" Down came the blankets; up went the curtain; open flew the door, and in walked Captain Olcott, followed by every man and woman in Plymouth who had heard at break of day the glorious news that the expected ship had arrived at Boston, and with it the long lost Captain Olcott. For an instant nothing was thought of except the joyous welcoming of the Captain in his new home.

"What's this? What is it? What does this mean?" was asked again and again, when the first excitement was passed, as the tall young pine stood aloft, its candles ablaze, its gifts still hanging.

"It's welcome home to father!" said Lucy, her only thought to screen her mother.

"She made it for me, mother did. But you may have it now, and all the pretty things that are on it, too, because you've brought my father back again; if mother will let you," he added.

Neither Pilgrim nor Puritan frowned at the gift. One man, the sternest there, broke off a little twig and said:

"I'll take it for the sake of the good old times at home." 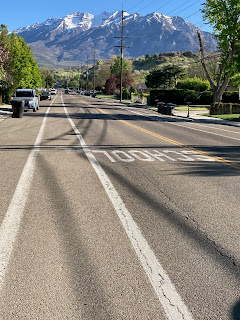