Memoirs of a Yellow Dog 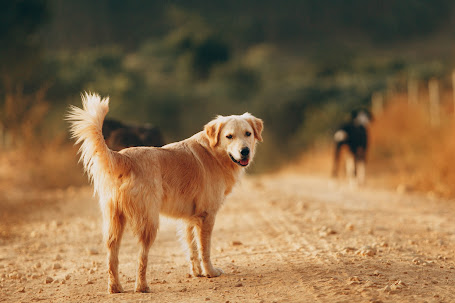 Editor's Note:  This is a public domain short story by the celebrated O. Henry. We thought this classic tale from a well-recognized author would certainly qualify for The Pensieve's mantra of  'Immersive Literary Art'.

I don't suppose it will knock any of you people off your perch to read a contribution from an animal. Mr. Kipling and a good many others have demonstrated the fact that animals can express themselves in remunerative English, and no magazine goes to press nowadays without an animal story in it, except the old–style monthlies that are still running pictures of Bryan and the Mont Pélee horror.

But you needn't look for any stuck–up literature in my piece, such as Bearoo, the bear, and Snakoo, the snake, and Tammanoo, the tiger, talk in the jungle books. A yellow dog that's spent most of his life in a cheap New York flat, sleeping in a corner on an old sateen underskirt (the one she spilled port wine on at the Lady Longshoremen's banquet), mustn't be expected to perform any tricks with the art of speech.

I was born a yellow pup; date, locality, pedigree and weight unknown. The first thing I can recollect, an old woman had me in a basket at Broadway and Twenty–third trying to sell me to a fat lady. Old Mother Hubbard was boosting me to beat the band as a genuine Pomeranian–Hambletonian–Red–Irish–Cochin–China–Stoke–Pogis fox terrier. The fat lady chased a V around among the samples of gros grain flannelette in her shopping bag till she cornered it, and gave up. From that moment I was a pet—a mamma's own wootsey squidlums. Say, gentle reader, did you ever have a 200–pound woman breathing a flavour of Camembert cheese and Peau d'Espagne pick you up and wallop her nose all over you, remarking all the time in an Emma Eames tone of voice: "Oh, oo's um oodlum, doodlum, woodlum, toodlum, bitsy–witsy skoodlums?"

From a pedigreed yellow pup I grew up to be an anonymous yellow cur looking like a cross between an Angora cat and a box of lemons. But my mistress never tumbled. She thought that the two primeval pups that Noah chased into the ark were but a collateral branch of my ancestors. It took two policemen to keep her from entering me at the Madison Square Garden for the Siberian bloodhound prize.

I'll tell you about that flat. The house was the ordinary thing in New York, paved with Parian marble in the entrance hall and cobblestones above the first floor. Our fiat was three—well, not flights—climbs up. My mistress rented it unfurnished, and put in the regular things—1903 antique unholstered parlour set, oil chromo of geishas in a Harlem tea house, rubber plant and husband.

By Sirius! there was a biped I felt sorry for. He was a little man with sandy hair and whiskers a good deal like mine. Henpecked?—well, toucans and flamingoes and pelicans all had their bills in him. He wiped the dishes and listened to my mistress tell about the cheap, ragged things the lady with the squirrel–skin coat on the second floor hung out on her line to dry. And every evening while she was getting supper she made him take me out on the end of a string for a walk.

If men knew how women pass the time when they are alone they'd never marry. Laura Lean Jibbey, peanut brittle, a little almond cream on the neck muscles, dishes unwashed, half an hour's talk with the iceman, reading a package of old letters, a couple of pickles and two bottles of malt extract, one hour peeking through a hole in the window shade into the flat across the air–shaft—that's about all there is to it. Twenty minutes before time for him to come home from work she straightens up the house, fixes her rat so it won't show, and gets out a lot of sewing for a ten–minute bluff.

I led a dog's life in that flat. 'Most all day I lay there in my corner watching that fat woman kill time. I slept sometimes and had pipe dreams about being out chasing cats into basements and growling at old ladies with black mittens, as a dog was intended to do. Then she would pounce upon me with a lot of that drivelling poodle palaver and kiss me on the nose—but what could I do? A dog can't chew cloves.

I began to feel sorry for Hubby, dog my cats if I didn't. We looked so much alike that people noticed it when we went out; so we shook the streets that Morgan's cab drives down, and took to climbing the piles of last December's snow on the streets where cheap people live.

"What are you looking so sour about, you oakum trimmed lobster? She don't kiss you. You don't have to sit on her lap and listen to talk that would make the book of a musical comedy sound like the maxims of Epictetus. You ought to be thankful you're not a dog. Brace up, Benedick, and bid the blues begone."

The matrimonial mishap looked down at me with almost canine intelligence in his face.

"Why, doggie," says he, "good doggie. You almost look like you could speak. What is it, doggie—Cats?"

But, of course, he couldn't understand. Humans were denied the speech of animals. The only common ground of communication upon which dogs and men can get together is in fiction.

In the flat across the hall from us lived a lady with a black–and–tan terrier. Her husband strung it and took it out every evening, but he always came home cheerful and whistling. One day I touched noses with the black–and–tan in the hall, and I struck him for an elucidation.

"See, here, Wiggle–and–Skip," I says, "you know that it ain't the nature of a real man to play dry nurse to a dog in public. I never saw one leashed to a bow–wow yet that didn't look like he'd like to lick every other man that looked at him. But your boss comes in every day as perky and set up as an amateur prestidigitator doing the egg trick. How does he do it? Don't tell me he likes it."

"Him?" says the black–and–tan. "Why, he uses Nature's Own Remedy. He gets spifflicated. At first when we go out he's as shy as the man on the steamer who would rather play pedro when they make 'em all jackpots. By the time we've been in eight saloons he don't care whether the thing on the end of his line is a dog or a catfish. I've lost two inches of my tail trying to sidestep those swinging doors."

The pointer I got from that terrier—vaudeville please copy—set me to thinking.

One evening about 6 o'clock my mistress ordered him to get busy and do the ozone act for Lovey. I have concealed it until now, but that is what she called me. The black–and–tan was called "Tweetness." I consider that I have the bulge on him as far as you could chase a rabbit. Still "Lovey" is something of a nomenclatural tin can on the tail of one's self respect.

At a quiet place on a safe street I tightened the line of my custodian in front of an attractive, refined saloon. I made a dead–ahead scramble for the doors, whining like a dog in the press despatches that lets the family know that little Alice is bogged while gathering lilies in the brook.

"Why, darn my eyes," says the old man, with a grin; "darn my eyes if the saffron–coloured son of a seltzer lemonade ain't asking me in to take a drink. Lemme see—how long's it been since I saved shoe leather by keeping one foot on the foot–rest? I believe I'll—"

I knew I had him. Hot Scotches he took, sitting at a table. For an hour he kept the Campbells coming. I sat by his side rapping for the waiter with my tail, and eating free lunch such as mamma in her flat never equalled with her homemade truck bought at a delicatessen store eight minutes before papa comes home.

When the products of Scotland were all exhausted except the rye bread the old man unwound me from the table leg and played me outside like a fisherman plays a salmon. Out there he took off my collar and threw it into the street.

"Poor doggie," says he; "good doggie. She shan't kiss you any more. 'S a darned shame. Good doggie, go away and get run over by a street car and be happy."

I refused to leave. I leaped and frisked around the old man's legs happy as a pug on a rug.

"You old flea–headed woodchuck–chaser," I said to him—"you moon–baying, rabbit–pointing, egg–stealing old beagle, can't you see that I don't want to leave you? Can't you see that we're both Pups in the Wood and the missis is the cruel uncle after you with the dish towel and me with the flea liniment and a pink bow to tie on my tail. Why not cut that all out and be pards forever more?"

Maybe you'll say he didn't understand—maybe he didn't. But he kind of got a grip on the Hot Scotches, and stood still for a minute, thinking.

"Doggie," says he, finally, "we don't live more than a dozen lives on this earth, and very few of us live to be more than 300. If I ever see that flat any more I'm a flat, and if you do you're flatter; and that's no flattery. I'm offering 60 to 1 that Westward Ho wins out by the length of a dachshund."

There was no string, but I frolicked along with my master to the Twenty–third street ferry. And the cats on the route saw reason to give thanks that prehensile claws had been given them.

On the Jersey side my master said to a stranger who stood eating a currant bun:

"Me and my doggie, we are bound for the Rocky Mountains."

But what pleased me most was when my old man pulled both of my ears until I howled, and said:

"You common, monkey–headed, rat–tailed, sulphur–coloured son of a door mat, do you know what I'm going to call you?"

I thought of "Lovey," and I whined dolefully.

"I'm going to call you 'Pete,'" says my master; and if I'd had five tails I couldn't have done enough wagging to do justice to the occasion.